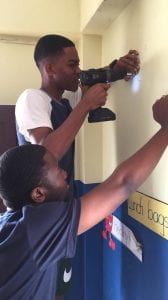 Mulvina White Early Childhood Centre on Slipe Road in Kingston has received much needed assistance from the Key Club at the Wolmer’s Boys School to improve the institution’s infrastructure.

The club which is a part of Jamaica Key Club District, has been working with the Centre since 2016. They have donated exercise books, pencils, fans and community service hours to the early childhood institution. Through a project in December, the young men who are a part of the club installed ceiling fans and repaired electrical outlets at the ECI. During their hours of service on Mondays and Wednesdays, they read to the children.

President of the Key Club and upper 6th form student at Wolmer’s Boys School, David Deslandes, said “The upgrading work being undertaken by the club, is helping the Early Childhood Institution to meet the 12 Operating Standards of the ECC for the ECI to become certified. The aim of the current project is to create a better learning environment for approximately 65 children who are enrolled.”

Since the partnership began, the Club has hosted a Christmas treat for the children each December as well as fundraising activities since the partnership began. Last year, a fundraiser was held and the earnings were used to procure fans. District Administrator for the Jamaica Key Club District, Christopher Humber said “We met with the parents and the remaining monies from the fundraiser will be used to open accounts for the children to encourage saving.”

About the Author: ECC

Hello Twitter Family. As you eat your breakfast, l